“Painting is the future”: Jenny Cho’s painting through other means 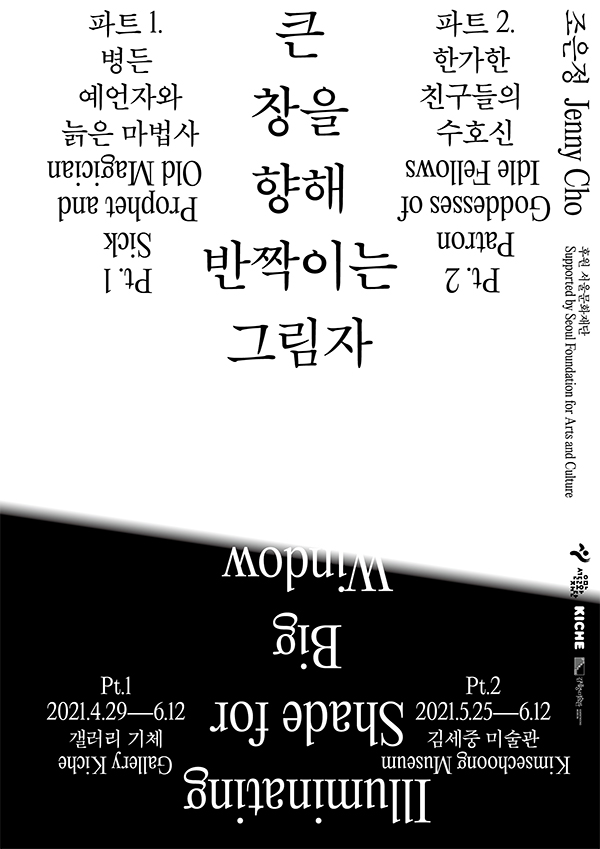 The institution of painting

“Is painting valid today?” The meta-critical question about the medium of painting underlies Jenny Cho’s newest body of works, exhibited under the title Illuminating Shade for Big Window. The contexts in which she asks the question are manifold. On one hand, the post-medium condition sprung by art’s conceptual turn has undermined the search for meaning inherent in a medium. When the modus operandi of today’s art is to choose, adapt, and invent whichever medium that suits the intellectual project of the artist, is the category of painting something worth holding onto? On the other hand, painting has been the target of numerous critiques that debunked its idealist and elitist assumptions, which led critics like Douglas Crimp to diagnose the “end of painting” already underway since the 1960s. If the painting continues to live, then, what meaning is it capable of generating? Why and how does painting still matter?

In what is now a classical television series Ways of Seeing (1972), art critic John Berger illustrated the set of rules, habits, and assumptions that govern the European tradition of painting. His goal was to disabuse the audience of the painting’s myth—its claims of universality, objectivity, and autonomy—by demonstrating its technology of representation (e.g., the medium of oil on canvas and linear perspective), as well as its role in shoring up the interconnected ideologies of bourgeois capitalism, patriarchy, humanism, and colonialism. Berger’s critique is bracketed with the wave of critical endeavors in art since the 1960s, from conceptual art to institutional critique, which sought to deconstruct and demystify art as an establishment.

In 2021, the legacies of the tradition of painting and its ideological corollaries still remain relevant. The romantic humanist myths of the artist as an individual genius and of the painting as a singular object constitute the backbone of our ever-soaring art markets. The habit of objectification and sexualization of Others still permeates contemporary image production, particularly in advertisement and popular culture. Despite the expanding discourse of globalizing art and art history, the art world continues to grapple with deeply ingrained and internalized forms of coloniality.

Jenny Cho’s works are inspired by the uneasy relation that she, as a Korean female painter educated in the U.S., has with this Western tradition. Instead of utilizing the tools of painting to simply insert herself into that tradition, she tasks herself to question the language of painting and explore alternative ways in which painting as an institution—its laws, customs, and aims—can be reconfigured. This essay identifies appropriation, palimpsest, and relationality as the key tenets of her methodology, and unpacks how these provide the means of reclaiming painting after the “end” of painting.

Painting through other means: appropriation, palimpsest, and relationality

The exhibition currently on view at Gallery Kiche consists entirely of painting, many of which harken back to canonical figures in the history of Western art. For some, Jenny Cho’s engagement with the past may seem anachronistic—a romantic remembrance of painting’s glory. For others, it may recall the work of postmodernist artists like Sherrie Levine who, by divesting the original work of art of its inherent value, called attention to the socio-cultural contexts that confer such meaning. Upon close examination, however, Cho’s methods of appropriation do not seem driven by either nostalgia or irreverent playfulness. Instead, her paintings are conceptual experimentations with the temporality of painting, particularly with the possibility of painting as palimpsest, in which the originary moments of the cited images form but one layer.

A palimpsest retains the traces of earlier writing even after it has been reused. Unlike the modern conception of time and space as standardized, linear, and segmented, the palimpsest calls attention to, and folds unto itself multiple temporalities and perceptions of space. In Cho’s paintings, these temporalities and spatial perceptions are indexed by the paintings, films, and novels that she has encountered at unspecified moments in the past. For instance, the Untitled (after Hunter Gracchus) (2018-2020) appropriates Andrea Mantegna’s quintessential Renaissance painting Lamentation of Christ (1480) as it was mediated by another appropriation of the piece by Robert Morris in 1989. The Balcony (after Magritte) (2017-2020) and The Difficult Crossing (after Magritte) (2017-2020) take after the eponymous works of the twentieth-century Surrealist Rene Magritte but extract only partial elements from the original paintings (the balcony railing for the former, and the painting-within-a-painting of a stormy sea for the latter) and recompose them with indices of other times and places. The Still Life (after L’argent) (2017) depicts a scene from Robert Bresson’s 1983 film L’argent, which is itself based on Leo Tolstoy’s 1911 novella The Forged Coupon. In the Sunrise (after Turner) (2020), the Turner-esque synthesis of the sublime (timeless) and the atmospheric (transient) takes a Surrealist turn with the trompe-l’oeil lettering that marks the year 2020 when the painting was made.

Often, the elements the artist chooses to amplify, add, or otherwise manipulate work toward metaphorizing her sense of belonging across and in-between cultures, places, and times. The enlarged pattern of metal railing in the Balcony (after Magritte) is an ambivalent device that both separates and connects the world of the viewer and the unidentifiable space of floating flowers. In the Untitled (after Hunter Gracchus), Cho has substituted the deathbed of Jesus with the death boat of Gracchus from Franz Kafka’s Hunter Gracchus (1931), who is portrayed by Kafka as neither dead nor alive and is destined to eternally wander the seas. The Sick Prophet and Old Magician (after Jean Baptiste Oudry) (2020) rehashes the French academic painter Jean-Baptiste Oudry’s Wolf and Lamb, which depicts the moment of fatal encounter between the prey and the predator. At times, the reference is more literal. The Future Is Painting (2017-2020) is a still life that brings together the devotional artifacts and other miscellaneous items that the artist’s grandmother, who had converted from Buddhism to Catholicism, has collected from the U.S. and Korea. Here, the replicas of the various iconic representations of Christ and Virgin Mary, the statuette of Pope Francis, the snowman-shaped souvenir celebrating Christmas, and calendars and clocks indexing (probably) the time of the painting form a labyrinth of spatio-temporal connections at the same time as symbolizing the artist’s (and of course, her grandmother’s) mobility across cultures.

If Cho’s individual paintings allegorize the in-betweenness of the artist’s fluid and plural identity as well as the multiple forms of temporal and spatial relations, the artist has further designed the entire body of works to bring attention to the relationality between paintings. Despite their divergent motifs and styles, the paintings are organized in a way that conjures up various resonances between them. Consider, for example, the juxtaposition of the deathbed/death boat of the Untitled (after Hunter Gracchus) next to The Bedroom Painting (2017-2020), whose stripped-down interior adds an austere, modern resonance to the death of Christ/Gracchus. The Bedroom Painting’s hazy, lifeless mood is inspired by Ottessa Moshfegh’s 2018 novel My Year of Rest and Relaxation, which is set in New York right before the terrorist attack on World Trade Center on September 11, 2001 and tells a story of a post-collegiate woman who drugs herself to as much sleep as possible in order to opt out of the world. The two miniature-sized works Sick Prophet and Old Magician (after Jean Baptiste Oudry) and Sunrise (after Turner) echo one another in their semi-abstract rendition in gestural brushstrokes and monotonous or near-monotonous hues. Together, they invoke powerful emotional responses to the laws of nature—the earth’s rotation and the strong preying on the weak. Cho’s paintings thus form a network of meaning and affect that converge, dissipate, and transform as the viewer moves from one painting to another.

In the second part of exhibition on view at Kimsechoong Museum, one finds the principle of relationality extending to her works executed in other mediums. The Hinge Frame Set (2015-) and the Patron Goddesses for Idle Fellows is the Clouds (2020) transpose Cho’s conceptual experimentations in architectural and virtual terms, respectively.

The Hinge Frame Set is a modular structure consisting of aluminum bars that meet perpendicularly to one another, which can be arranged variously to serve as flexible frames for hanging canvases. To this structure, the artist has installed glass panels that bear printed images of the photographs she took of the exhibitions of other Korean artists like Park Seo-bo and Min Joung-Ki and of miscellaneous urban and natural sceneries from Seoul, New York, and Houston. The images are photoshopped and assembled in a way that blurs the boundary between them and are installed in a number of different positions and angles that undermine the conventions of displaying pictures in a white cube.

The Patron Goddesses for Idle Fellows is the Clouds is an Augmented Reality (AR)-based work that produces virtual images of clouds moving across the gallery space like contrails, revealing and masking randomly appearing images as they move. In the Greek comedy The Clouds by Aristophanes, the clouds are described tongue-in-cheek as the “patron goddesses of idle fellows,” by which the author ridicules idle thinkers like Socrates as sanctioned only by the clouds—full of pomp but without substance. While the reference on one level reads as a mockery of the status of painting or art in general, the artist has added a twist by transforming the clouds in the AR image into a mobile agent—just like her new concept of painting—that glides along un-predetermined trajectories in a dynamic relation with the space and images around them.

Painting is the future

In Cho’s works, the traditional notion of painting as singular and self-contained transforms into something more fluid, plural, and relational. This may be understood in part as a result of her ongoing dialog with recent discourses aimed at reconceptualizing painting. One primary example she cites is what art critic Jan Verwoert has theorized as the “adjacency” of painting, which refers to the possibility of painting to serve as a “portal” or “passageway” to the concepts, objects, and worlds that lie outside of painting¬ such as other genres of art (e.g., literature and music) and the larger sociocultural contexts surrounding art. Verwoert aptly proposes that we think of painting as analogous to a cellophane curtain: it is neither a window onto the world in the traditional sense nor the modernist flat surface—a dead end—but a semi-transparent screen that provides an incomplete view of what lies behind, and ultimately, can be lifted to allow the viewer into the world beyond it. Analyzing a body of recent works by artists such as Jutta Koether and R. H. Quaytman, art historian David Joselit advanced similar ideas via his concept of “transitive painting.” In his essay “Painting Beside Itself,” Joselit has argued that the work of these artists embodies a new model of painting that visualizes the painting’s incessant circulation within a network of artistic and social relations, and its “infinite dislocations, fragmentations, and degradations” that follows.

But what I find most meaningful in Cho’s work is that she has arrived at painting’s fluidity and plurality via her self-identity on the margins of the history of painting. Historically, the dichotomies underlying dominant modes of aesthetic judgment—between the Self and the Other, between the avant-garde and the belated, and between the universal and the particular—have functioned to trap marginalized artists in a double bind. These artists would be denied from the hegemonic cultural sphere of white male artists masquerading as avant-garde and universal, at the same time that their works were insistently framed as gendered, racialized, late, and derivative, thus artistically inferior. It seems to me that Jenny Cho’s reconceptualization of the painting provides an opening for liberating the painting and the artist from this double bind. Her work refuses to perpetuate the logic of either/or, and sheds light on the various forms of entanglement that undergird our world and identity. In this sense, the painting is valid today; and perhaps still more, as one title of her paintings declares, painting might indeed be the future.