Divinity, spirituality and thus perhaps humanity, opened by the texture of light.

回光返照 – to illuminate again by reversing the light; and therefore to look directly into one’s inner spirituality without relying on language or sign (Dhyāna Buddhism).

“If I am to say that the semi three-dimensional works of objet art were a narrative of light and space, the plane canvas works are light as a result of temporal flow […] Light here signifies an absolute entity, and color signifies the entirety of what composes the material world […] And finally I have realized that to pursue light in the screen is a journey towards the discovery of myself. (Artist’s Note, June 2022)

At dawn of the world, God created light. Hence light preceded every existence in the world. It is, therefore, natural that light symbolizes what would come next, say, the seed of life, the archetype of existence and the origin of everything. It symbolizes God, His words and logos. It symbolizes ‘the hidden God’ that is ubiquitous (Lucien Goldmann). But how exactly do we come to understand God that is absent and existent, and He who exists only through absence? Such a question becomes the main assignment of the artists who are natural iconographers who know God and are endowed with His expression; are symbolists and the producers of representations; who, therefore, should be regarded as the priests of God. The artists have invented nimbus (the light that is drawn behind saints) to better convey the holiness of God, and have invented stained glass. And through such medieval icon painting, and through the solemn yet soft texture of the light through the sky window people could experience the presence of God.

But when the age of God gave way to the age of human, as in post-Renaissance, light too gained a new status as a medium of expressing humans (strictly speaking, to express the divinity that has entered human existence and to imply God’s presence as part of humanity). This is particularly so in Baroque art, with the exemplars of Georges de La Tour and Rembrandt whose paintings depict the subtle and holy light emanating from the inner part of self, and in case of Caravaggio whose works illustrate a dramatic tension and mimic the reified form of painting and pathos by the inclusion of light.
And ever since the world saw the Enlightenment and the advancement of natural sciences, light became the problem of color, which can be witnessed in the works of impressionists who were the first to recognize the optic relationship between light and color. In fact, the impressionists are the first artists to have walked into the light in search of color, and that is where they earned the name of “plein air painters”.

And the Art Field painters follow in the trail of light in the age of abstraction that followed the age of representation, which can perhaps be regarded as the continuum that persists today. Mark Rothko and Barnett Newman, who are supported by the critics Clement Greenberg and Harold Rosenberg, fall under such category in particular. Rothko and Newman have, respectively, inherited the ‘planeness’ (the origin where painting begins in the modernist paradigm, as a ground of painting, so to speak) by Greenberg and the emotion of nobility (the emotion of a transcendental entity, therefore perhaps denoting the divinity that returned to inner parts of humanity) by Rosenberg and such legacy has some certain connection to Spiritualist Art which has recently risen as an antagonistic movement against materialism, and in a bigger scale, corresponds to Hyunjoo Park’s works.

It is viable to interpret her works as untimely, as the works have re-conjured divinity that we regard as obsolete, but it is more valid, it seems, to view her works as the cornerstone to revisit divinity that has once thought to be forgotten (it is more valid to look at God and divinity as part of human instinct ontologically rather than epistemologically). And here lies the need to attend to the change in the artistic grammar, from representation to abstraction. Abstraction itself, so to speak, corresponds to the traditional methodology of expressing God that is absent but existent, and who exists only through absence. And therefore perhaps we could safely argue that the sleeping God in contemporary art has awaken through abstraction, and in so doing God and the divinity are achieving their true self-expression.

And so the artist draws light and color. Light and color, then, are not only objects for the artist but the theme itself. The artist’s work that thematizes light and color thereby bifurcates to the three-dimensional plastic art and plane tableau art. We should understand the signification pursued stays intact despite the variegated formats. Perhaps the only difference is that, due to formal characteristics, three-dimensional plastic art displays and relies on formal logic more heavily whereas plane tableau art helps the audience to focus more on the meaning of the art due to the attention given to the painting itself.

Examining the three-dimensional plastic art first, as per her request, the artist’s works hang on the wall. They are hung and become a dent on the wall. The artist forges a square and/or rectangular alternate frame with abnormal thickness and paints the surface with a monotone color. And all sides, for example, the top and bottom part of the frame of the screen and the left and right part, are gold foiled. Here we see the frontality principle in play, which is the traditional grammar of painting. We stand in front of the painting almost automatically due to our habitual use of perspective. The artist seems to have meticulously planned the use of our habit: the part that the artist wants us to see is the frontal part with the color, and the gold foiled sides are merely supplementary.

Hence the color is viewed frontally, and light enters the vision accidentally. We could say that the light is seen indirectly. It is precisely with this indirectness where the artist’s outstanding sensibility towards the texture, the aura and the reverberation of light resides. Instead of directly visualizing the light source, the artist employs indirectness; in so doing, the reflection of light from the object that received the light will amplify the reverberation and aura of light.

It is here where a series of tableau works lie. The works are more inward than the three-dimensional plastic art work, and the tableau is more deeply internal than the three-dimension. We can see in her tableau works where the artist’s traditional tempera technique (her most impressive strength) really starts to fortify and edify its presence. After laminating the linen with rabbit glue, the artist works on the Ba-tang with gesso made from a mixture of whitener, titanium white and rabbit glue solution that has been double boiled, and the completeness of this sole process qualifies to be called art already. That is how much the artist prioritizes the process. She then gold foils the Ba-tang or sprays gold powder on it.

And in the final step she colors the canvas and the subtle yet sensitive ambience where light and color merges is achieved through the light where its soft texture permeates from underneath the color, where the potential property of light that the color has been inherently endowed with is finally finding its own language, and where color itself seems to emanate light of its own. And another prevailing ambience overlaps on the forementioned ambience; upon close examination we see the drawing is full of atypical stains of all sizes. Perhaps the artist spread the gold powder at will, or spread the paint as she pleased. And the atypical stains probably came to existence through such an act, like tachisme; and by painting on top of the stain the stain sometimes becomes more accentuated, or produces a subtle and soft texture of light as if the stain sank down beneath the surface of the canvas. 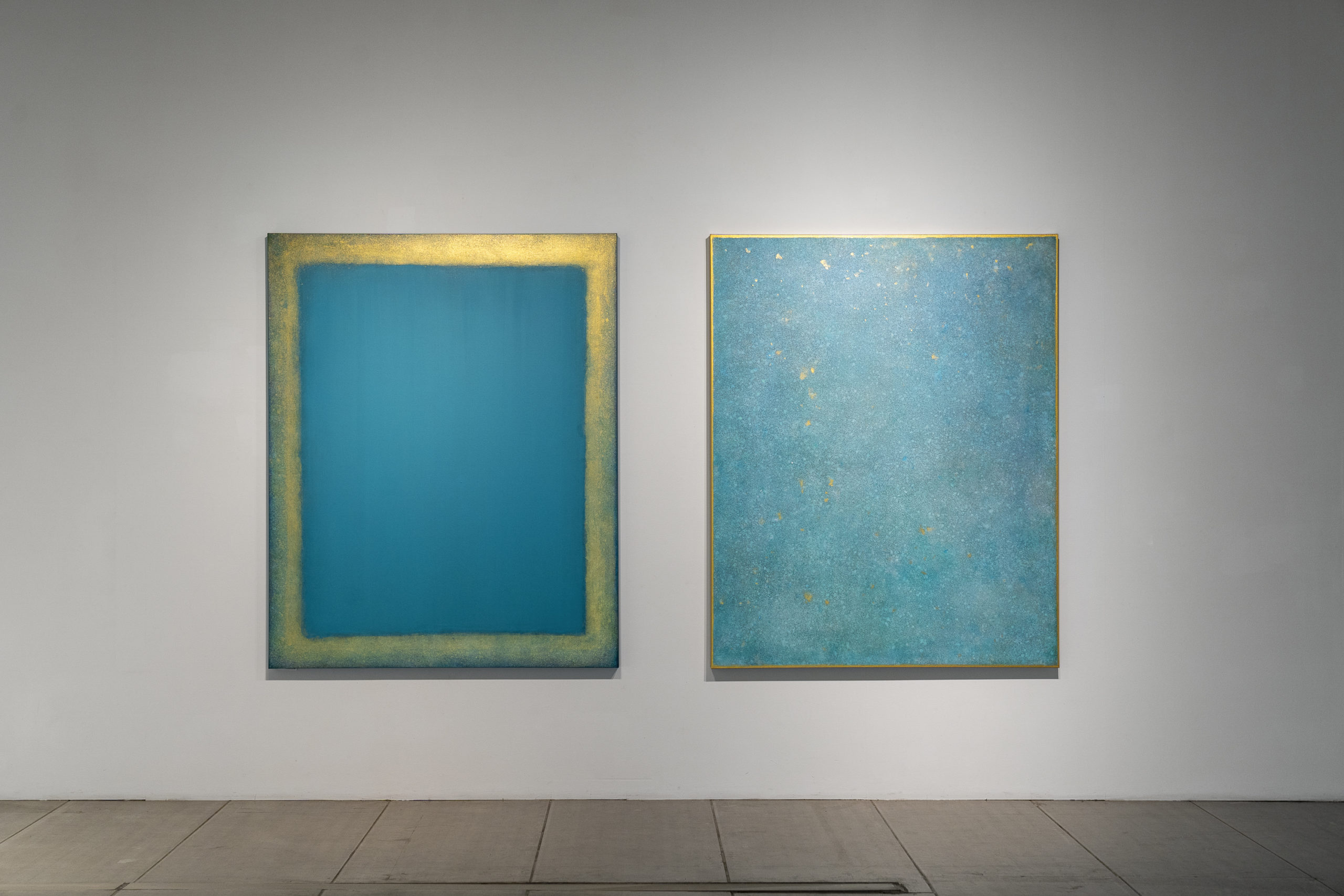 Walter Benjamin called the emotion that is distant but feels close, that which is far away but feels palpable as “aura”. What is aura? It may be a God, may be a divinity that men possess as part of their instinct, or a forgotten scenery inside us. Benjamin famously said that such an aura resides in medieval icon paintings. The artist’s paintings, describable as the texture of light and the aura of light, perhaps open up a possibility of transgressing the boundary between art and religion, and humanity and divinity.