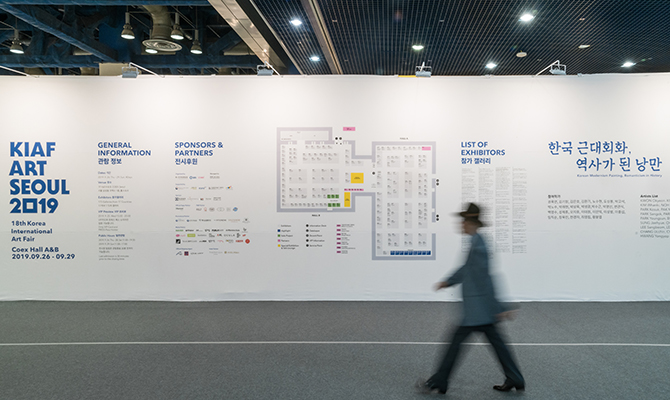 In 2019, KIAF ART SEOUL attracted 82,000 spectators, which is a 130% increase from the previous year, and recorded the highest sales record ever with a total turnover of 31 billion won. The special exhibition of the year, "Romanticism in History-Korean Modernism Painting Exhibition" shed light on Korean Modern artists. It was celebrated as a meaningful moment re-examining the Korean modern art artists in the dynamic Korean contemporary art market. A total of 38 modernization paintings by 26 Korean artists were exhibited, offering a fresh view of the exquisiteness of ‘our painting, our modern art’. 《KIAF ART KIDS》 also returned to KIAF in 2019. Together with creative art educators, kids explored the works of artists participating in KIAF ART SEOUL 2019 and engaged in six different exciting art activities programmed for children’s eyes. 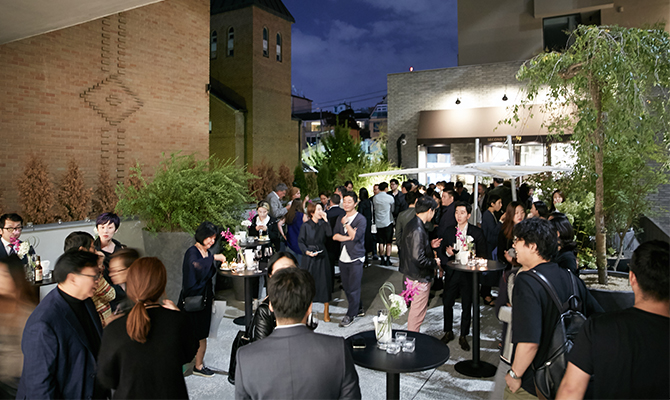 Through newly applied designs, KIAF ART SEOUL in 2018 highlighted its identity. Various world-class lecturers were gathered to provide a variety of conversation programs, unveiling the flow of the art market. Furthermore, a special exhibition 《ARTIST PROEJCT》 was organized in conjunction with the Gwangju Biennale, showcasing works by four artists participating in the biennale that year. Given Gwangju Biennale’s historical significance and its presence in the international art scene, the special collaboration with KIAF provided a unique intersection with discussions around contemporary art and the art market. 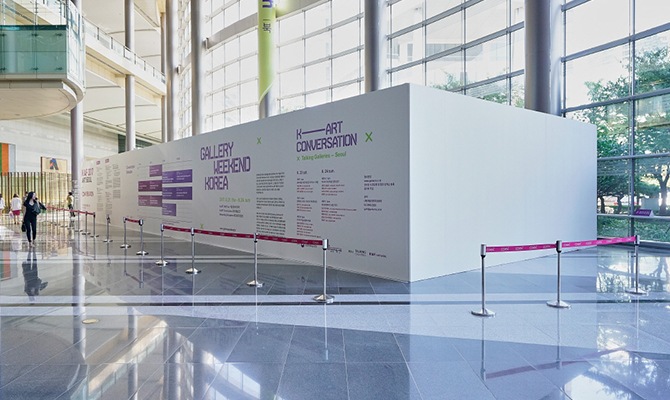 By nurturing the continued growth of the Korean art market and serving as a conduit between Asia and the international scene, KIAF ART SEOUL became a principal destination for art professionals and enthusiasts worldwide. It was a year various changes were made, and the total transaction amount hit about 27 billion won, the highest sales record. The focus was on qualitative development rather than an outward expansion. Thus, the guest of honor system was brought to an end after eleven years of running. KIAF ART SEOUL launched two new divisions in 2017, titled HIGHLIGHT and Solo Project. These platforms helped to promote Korean artists in the global art world. There were two special exhibitions called “Ineffable Things,” a special exhibition on media art was presented both in and outside of the venue, and “Explores of Experiment and Challenge,” an archive exhibition illuminated the 50-year-history of Korean performance art. More strengthened conversation programs and lectures proved that KIAF ART SEOUL is expanding beyond the art trade arena into a more prominent cultural event and exhibition platform. 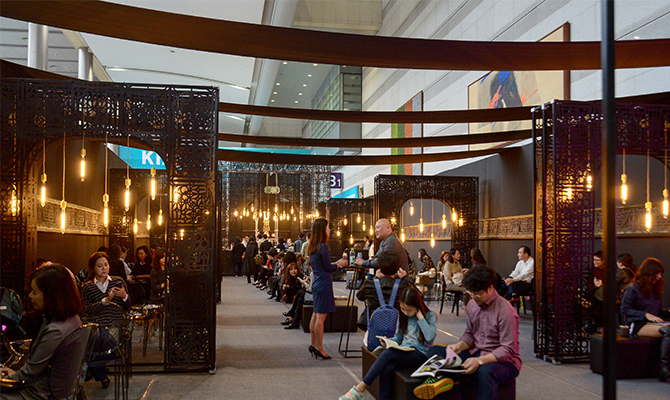 The guest country of honor was Taiwan and its eleven most prominent galleries were invited to represent the Taiwanese contemporary art scene. The country newly emerged as the center of Asian contemporary art and played a leading role in the Asian art industry. Around a thousand overseas collectors were invited, the largest number yet. The ‘Special Hallway’ exhibition was expanded to z form of a competition, allowing individual artists as well as various domestic and foreign organizations to participate. Hosted by the Ministry of Culture, Sports and Tourism and organized by the Korea Arts Management Service, a program titled “Gallery Weekend Korea” was launched for the first time to support and promote Korean galleries and its affiliated artists to overseas markets, thereby strengthening their networks with the international art community. ‘K-Art Conversation’ was one of the programs, during which industry professionals of international clout gathered to offer their insights and views on a broad spectrum of issues. 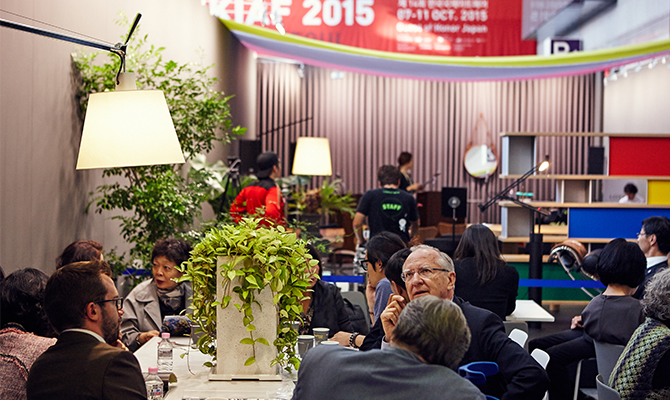 In 2015, the official name of KIAF has been changed to KIAF ART SEOUL, in line with a vision to broaden its scope from Asia to the world. To mark the 50th anniversary of the establishment of diplomatic relations between Korea and Japan, Japan was selected as the guest country of honor. Twenty galleries participated, the largest number ever. Also, with the sponsorship of the Lotte Department Store, the "Japanese Contemporary Art Special Exhibition" was held to give an overview of the current state of Japanese contemporary art. Kohei Nawa, Yayoi Kusama, Yoshitomo Nara, and other distinguished Japanese artists participated, drawing attention from the global art market. Special Hallway, a special exhibition comprised of large sculptures and installations, was newly introduced. By converting the hallway spaces into a space for avant-garde sculptural work, the new addition demonstrated that KIAF ART SEOUL is more than a simple venue for art transactions, but it is a ground for creativity and innovation. In addition, as monochromatic paintings became more and more popular, galleries brought forward numerous monochromatic paintings they have possessed behind the doors. The Asia Pacific Art Gallery Alliance (APAGA), an association of galleries from Singapore, Indonesia, Japan, China, Australia and Hong Kong, decided to promote mutual cooperation to promote art fairs in each country. The partnership between APAGA and KIAF ART SEOUL acted as the cornerstone of establishing "One Asia" in the future. 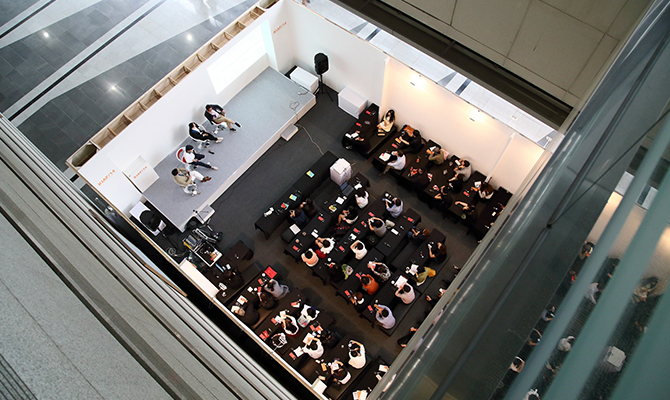 In 2014, KIAF ART SEOUL attracted a record of 88,000 spectators and 22 participating countries. Southeast Asia was selected as the guest country of honor, resulting in thirteen galleries from six countries including Singapore, Indonesia, Malaysia, Myanmar, Cambodia and the Philippines participating. Related to this, a special exhibition “The State of Southern Asian Contemporary Art and Its Market” was curated. “Art Flash: Art for Future Sense,” a Korean special exhibition, presented artworks of Interactive Media Art. By introducing these artworks responding directly to and communicated with the viewer’s movements and touches acted as a driving force for cultural enrichment. 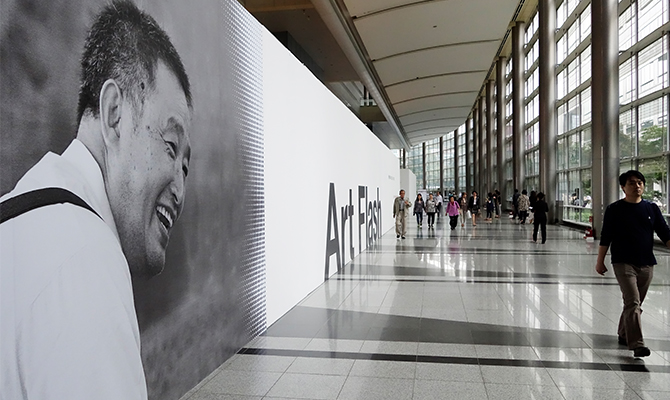 The year 2013 was very special for Germany and Korea, marking the 130th anniversary of diplomatic relations between the two countries and 50th anniversary of the dispatch of more than 10,000 miners and nurses to Germany. The two events were significant to everyone in the history of Korea and Germany. Germany presented a special exhibition titled “Art Market–Art Public”. “Art Flash: Two or Three Things We Know About Paik Nam June,” a Korean special exhibition presented a poetic vision created by a combination of insight into Paik Nam June, who had a profound impact on modern art history. Furthermore, a special exhibition titled “Gabriele Heidecker Art Affairs” was curated. The works of a Berlin photographer Gabriel Heitecker were presented, who worked on acclaimed art fairs around the world. 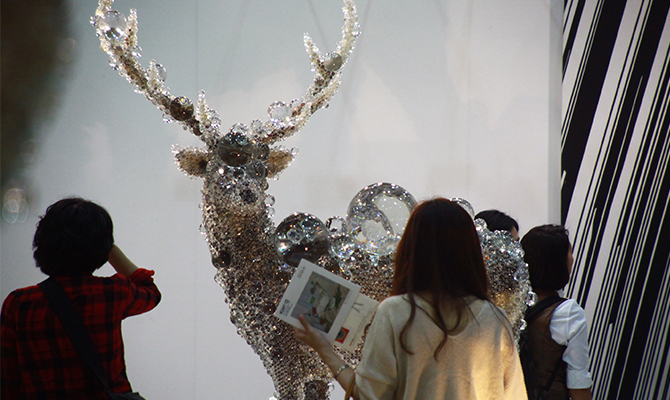 Marking the 50th anniversary of Korea-Latin America diplomatic relations, Latin America, an emerging star in the global art market, was selected as the guest country of honor in 2012. The special exhibition "Contemporary Art of Latin America, The Rising Star of the Global Art Market," acted as a ground for discovering the present Latin American art scene that had developed into a new form in a mixed cultural background. Following the previous year, the “Art Flash” special exhibition introduced works by young Korean artists in their 20s and 30s, providing a glimpse into the possibility of the self-reliance of Korean contemporary art under a more independent cultural environment. 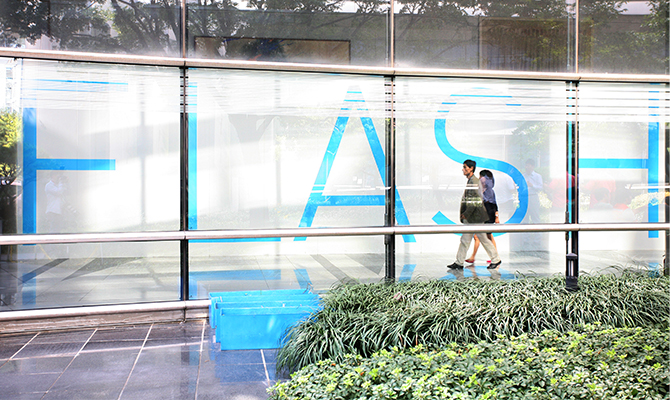 The number of young visitors doubled compared to previous years. Australia, the guest country of honor of 2011, participated in the special exhibition "Against Insularity: Selling Art in Australia". A special exhibition titled "Art Flash: Media & Installation Art" was organized, which selected Korean media artists who were active in the domestic and foreign art markets and presented a diversity of genres away from painting-oriented art fairs. It consisted of media art, installation art, and kinetic art. 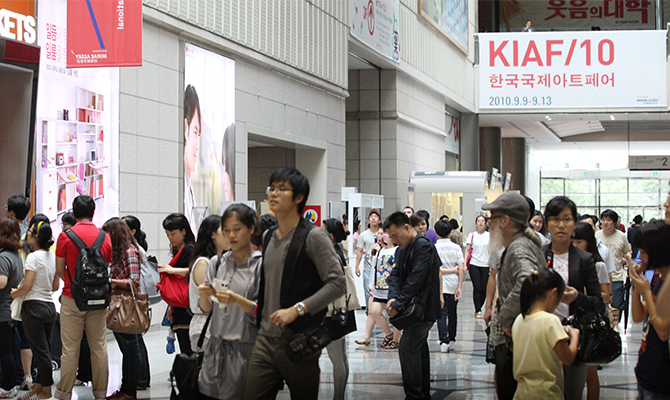 By examining the current state and issues of contemporary art in Britain, the guest country of honor in 2010, the visitors were able to look back on British contemporary art at the time. The special exhibition "Creative Power: Korean Media Art" recounted the past and present of media art, which is a representative genre of the 21st century. Starting from Paik Nam June's video art, the works of leading Korean artists combined with various genres of art, including installation and sculpture, provided a glimpse of the local media art and its latent creativity. 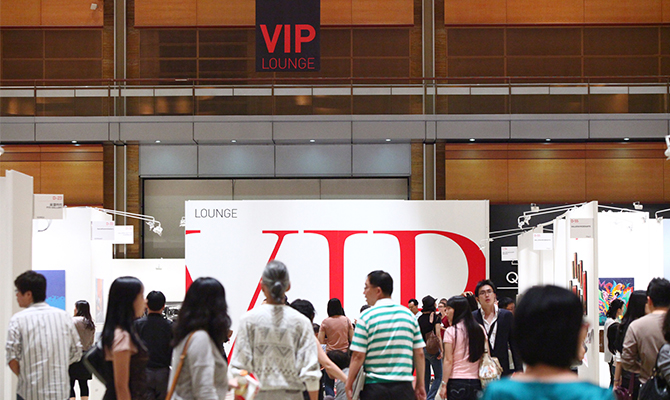 The special exhibition "Failed Plans" and related programs that comprehensively showed trends in modern Indian art have provided a platform for promoting the excellence and potential development of Indian art. In addition, through a special exhibition titled “Modern Boy Modern Girl – Modernism and Modernity in Korea,” the visitors looked at what modernity is in the modernization process and flow of Korean art from the 1920s to the mid-1950s. It was also the first year of "KIDS in KIAF," a children's art program designed to help children become friends with art. 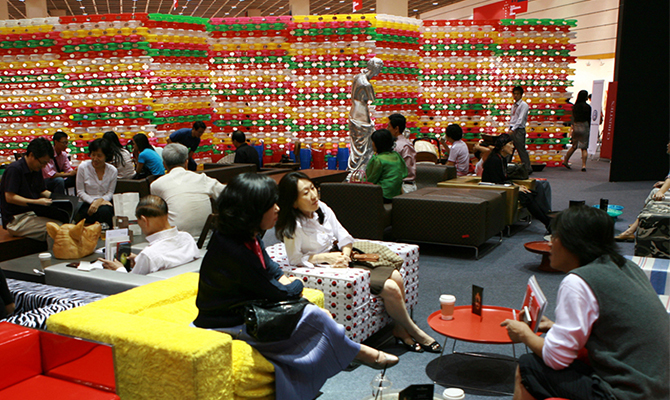 In 2008, 218 galleries participated in KIAF, setting a new record. Switzerland was selected as the guest country of honor and talked about its identity through the works of three young artists at the special exhibition "What You Get Is What You Want". The special exhibition "A Moonlit Garden" showed the representative nature of Korean art through the works of 10 veteran Korean artists who are active in the domestic and international art arena and play a pivotal role in Korean art. 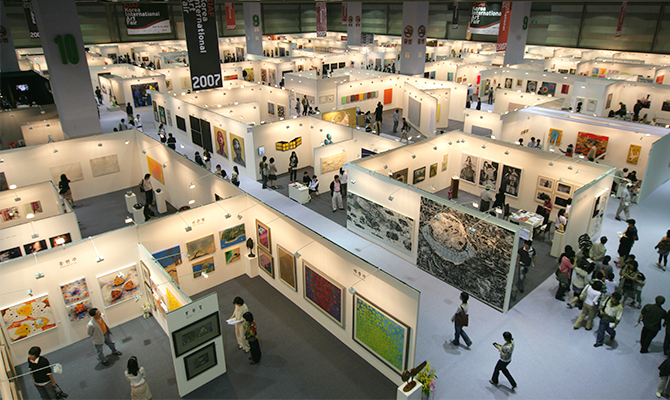 The size of KIAF has doubled from the previous year and has grown into a large art fair with more than 17.5 billion won in total transactions. A total of 208 galleries participated, and Spain was selected as the guest country of honor. A total of 14 Spanish galleries participated in the special exhibition "New Contemporary Art from Spain: A Proposal". In relation, a Spanish film festival, which introduced five independent Spanish films and other various academic programs were presented to the visitors. Another special exhibition, "Something Mr. C Can't Have," introduced Korean up-and-coming young artists. This performed as a platform that brought the art market and the field closer, providing collectors and art lovers at home and abroad access to more professional and dynamic experiences. 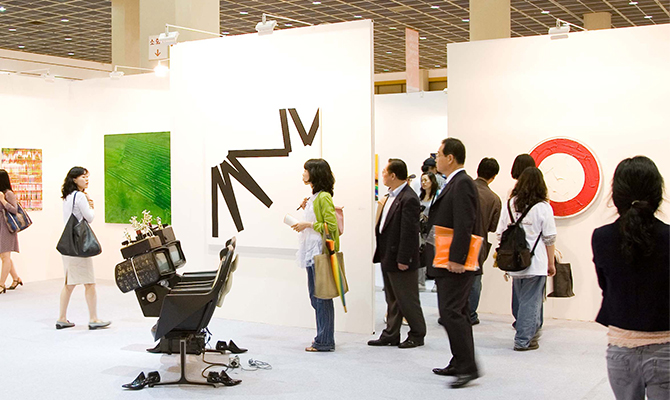 The size of KIAF increased by 120 percent in 2006. The special exhibition “Paris-Seoul” was curated to celebrate the 120th anniversary of Korea-France diplomatic relations. A series of related forums were organized, which proved that KIAF was ready to make a leap into the global market beyond the Asian and U.S. markets. 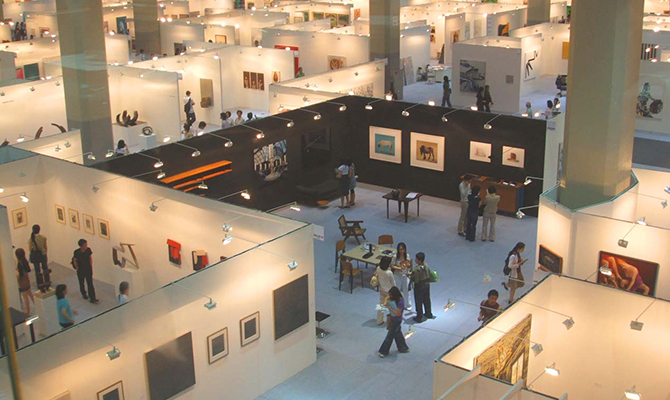 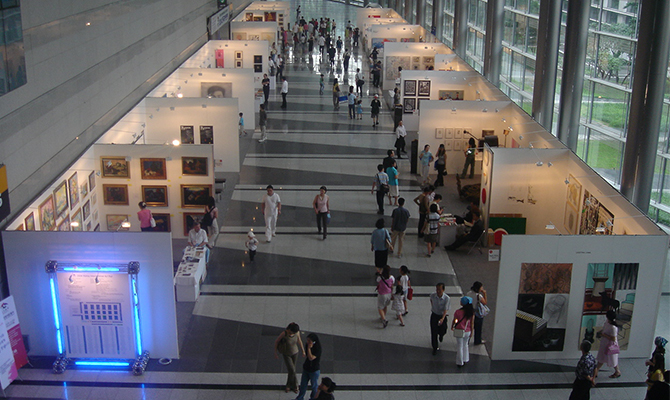 In 2004, two special exhibitions "Continental Japanese Painting" and "Digital Art Limited" were curated to illustrate the trends and issues of contemporary art. The "Continental Japanese Painting" exhibition focused on paintings as a medium, examining various aspects of contemporary Japanese paintings. The “Digital Art Limited” exhibition provided an opportunity for viewers to look at the current status of the digital media art scene and introduced various trends in media art such as single-channel video, introductions, and interactive art. 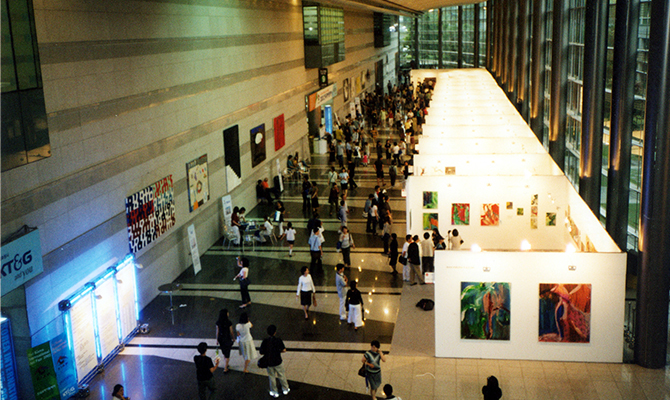 In 2003, KIAF moved its venue to COEX in Seoul, which continued to the present day. As an extension of the first year's special exhibition "Light of the East," the "Light of the East II" was presented, this time focusing on the sculptural artworks by contemporary artists from three countries: Republic of Korea, China, and Japan. Another special exhibition, "Today's Chinese Painting" was presented, featuring artworks that revealed challenges and experiments by contemporary Chinese artists who opposed the rules of the Chinese power system and art education. Furthermore, various academic seminar programs were introduced as a way to retain academic intensity and vigor. 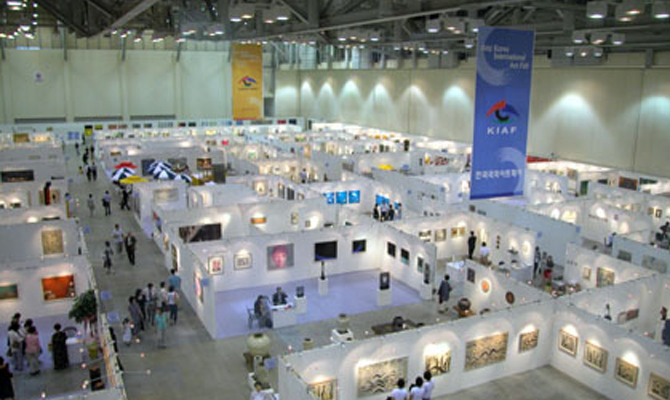 To expand the base of Korean art and to enhance its international competitiveness, the Korea International Art Fair (hereafter referred to as KIAF) first opened at BEXCO, Busan in 2002. It was the first and the largest international art fair held in Korea, designed to represent Korean art and to lead its market, as well as to serve as an international art fair that discovers the value of contemporary art and examines the flow of the art market. As a special exhibition of the first year, "Light of the East" was curated, presenting Korean, Chinese, and Japanese contemporary artists. This exhibition was designed to discover and present hope in human history by pursuing a new utopia in the experiment of mutual assistance and cooperation in Northeast Asia beyond simply the gathering of the three countries.