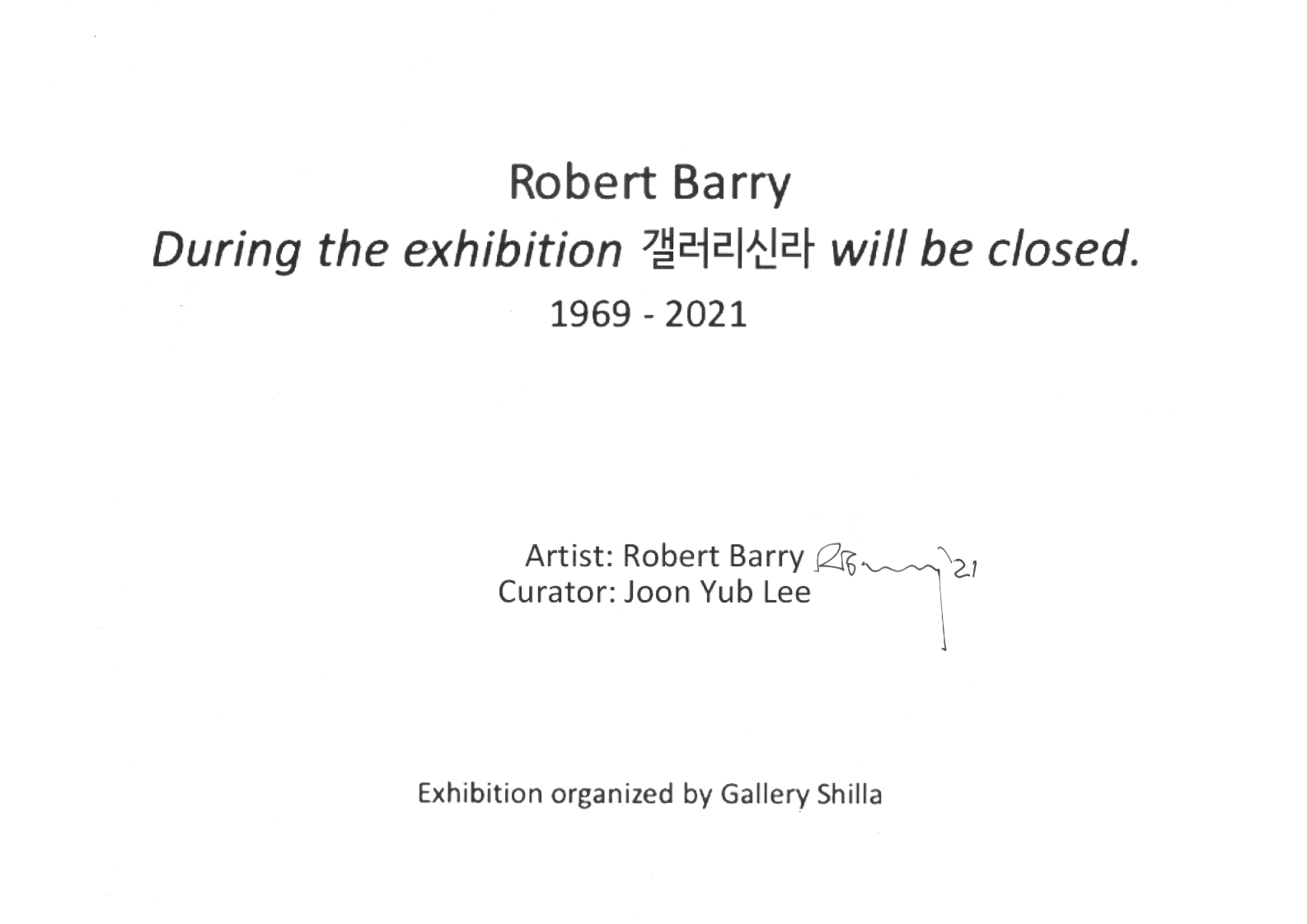 Robert Barry was one of the four conceptual artists that showed in Seth Siegelaub’s so-called Catalog Exhibition. The formal title, “January 5 – 31, 1969,” referred directly to the duration of the show. This was the beginning of conceptual art as we know it today. The work by the four artists – Lawrence Weiner, Robert Barry, Joseph Kosuth, and Douglas Huebler – was shown in a rented office space at 44 East Fifty-second Street. Given the relatively modest scale and diverse materials employed by the artists, their works were given unusual settings within the space. They were placed more or less indeterminately in atypical locations. Instead of the walls, the central visual focus of this exhibition was a stack of catalogs placed on a coffee table in front of a couch and chair. Siegelaub’s concept was that it did not matter where you saw or read the work. Rather the emphasis was on what he called “information.” According to Siegelaub, the work could exist anywhere at any time; and, therefore, what was reproduced and printed as content in the catalog was equal in importance to the “actual” work.

In 1969, the market for contemporary art – as we know it today – did not exist.
There were few “emerging artists” and fewer investors. This would change somewhat radically a decade later. Within the presumed marketing context of contemporary art, the notion of purchasing or collecting “conceptual art” was an unknown factor. How do you collect work that can be anywhere at any time? Why place a work of art on the windowsill or on the floor or ceiling? From a conceptual point of view, this has little importance given the priority of the idea. Even so, how do you pay for an idea?

It is important to grasp why an artist, such as Robert Barry, would want to propose a work of art, entitled Closed Gallery, which essentially meant the gallery would be closed for the duration of the artist’s exhibition. Beginning in 1969 in a non-commercial art space in Amsterdam, titled Art & Project, the first version of this “piece” (a term used to indicate the work is neither painting nor sculpture) introduced a radical new medium that was in the process of becoming known as “performance art.”

When Barry was asked what he was thinking when he launched his first Closed Gallery, his response was clear and to the point. Firstly, he was interested in pushing the boundaries of his art rather than repeating the same ideas over and again; and secondly, he wanted to understand what it means to function as an artist in modern times. To put it directly in the words of Barry, he was “adding to what Modernism could be.”

In brief, the issues were: What is art and who is an artist? In 1969, these concerns were of maximum importance. They were a means of questioning the occupation of art and of coming to terms with the profession of making art into a global environment where various cultures still seemed to play a role (which is less true today). Undoubtedly, some of this was inspired by Seth Siegelaub who spoke of closing his gallery around this period and, in fact, did precisely that. A year later he had decided to move to Europe.

So what does this have to do with Gallery Shilla in Seoul? There have been at least three galleries in Europe that have revived Closed Gallery (since the period of the late 1960s and early 1970s) and now it appears the time has come to move it to another continent, namely East Asia. Given the current popularity of art and cinema in Korea, this would appear the ideal place. The installation of Closed Gallery in Seoul should imply a unique Korean sensibility. This notion was something the artist, Robert Barry, endorsed, thus allowing the work to resonate beyond a mere description. Another issue that concerns Barry is his concept of ‘incompleteness’ as it relates not only to Closed Gallery, but also to his current work that focuses more specifically on the perception of language. What we need to know in Barry’s work is what is already there. Only then will it become possible to know what is not there. For example, Closed Gallery in 2021 is not Closed Gallery in 1969. Economics have entered more directly into the closure. What is being left out? Where is the truly significant art of our time? Is it possible that media conceals the truth? To clarify these issues is to be present and absent at the same moment. Closed Gallery suggests there is something missing. These are some of the questions and concerns viewers may have upon coming into contact with a work of art that is closed – hidden and inaccessible – in contrast to being open and accessible.